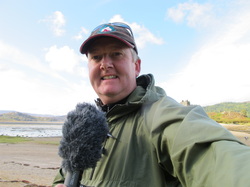 On Saturday 7th September 2013 I crossed the finish line at Brighton Pier to complete my 6,000 mile charity walk round the coastline of Britain to raise money for Alzheimer's.

I did the walk as a tribute to my mum who has Alzheimer's, and for the many people I know who also have the condition. The money I raised is for Alzheimer's Society and Alzheimer Scotland. So far I have raised over £62,000 and will continue to raise funds for these charities.

My trek took me three years and eight months to complete in stages (one year and 10 days of actual walking) so that I could continue to earn a living as a writer and video biographer! My overnight stop-overs were either in paid-for accommodation such as B&B's, pubs and hotels depending on where I got to at the end of each day, or I slept in my tent! By the end of the walk I had worn out six pairs of boots and lost a couple of spare chins!

As I plodded along I met and interviewed people who lived along the coast and some of their stories are on the website. I will include them in a book and radio series called "Characters on the Coastline".

In 2014 I will return to parts of the coast to interview more Characters On The Coastline, so if you know anyone who I should interview then please let me know.

Donations can still be made by clicking on this link.

Thank you for your interest and support.
Subscribe to my email updates